It’s globally recognized that the rum market is having a great success in this historic moment. But a
significant part of this success is due to a huge number of brands and consequently a big confusion in what
rum means. This confusion hides the risk that it could be only a short term success.
The category of rum includes rums from distilleries, rum which are only brands, private labels, rums aged in
tropical weather or in continental weather. It has no real distinction among different categories (apart from
AOC rhum agricole).
Velier was the first company, more than 20 years ago, to bring the concept of three ‘styles’ in order to make a
distinction in European market among Latin rums, British rums and French rums. Helpful in that time, but
bit inconsistent now.
Velier continues to work to propose to the trade world and rum community a unique language among
different categories. We think that rum’s long-term success requires these huge difference brought to light,
both among products and among producers.

The following classification has been created by Luca Gargano in 2015 and promoted together with Richard
Seale of Foursquare distillery (Barbados). It is based on distillation method, the only exhaustive method
to include all types of rum. It is not a way to understand quality but rather an objective method to classify,
giving credibility and value to the whole category of rum.

On top there’s the general distinction on raw materials: sugarcane juice, syrup and molasses.
On the first level of the diagram below, we find the Single Rum, distilled in batch still (1), an artisanal process
which best expresses the raw material and the know-how of the distiller. On the second level, we find Single
Blended Rum, a blend of rum distilled in column and batch still (2). At the third level, we find the Traditional
Rum which is distilled in traditional single or double columns (3). At the fourth level we find the Rum
produced in large volumes with modern multi-column distillation systems (4).

* Icons refer to the four types of stills used to produce rum. 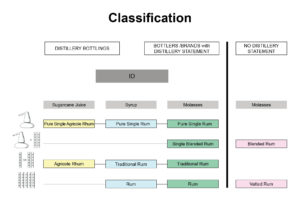 The classification can only apply to rums that state their distillery source, both if they are original distillery
bottlings and independent bottlings. Rums that do not have a distillery statement are impossible to classify
because we do not know how they are made and where they come from.